On August 2nd, I hopped on a train to Kingston with no sailing experience and a strong desire to learn. I knew that after the two weeks of sailing courses, I would leave with a good footing for my sailing career. I was less aware of the friendships I'd establish as classmates/instructors quickly turned into friends.

I arrived in Kingston the night before my one week live-aboard beginner cruising course with Wavelength Sailing School. I was able to find a marine store open that night where I could buy all the supplies I needed for the next 2 weeks. Kitchener has no real body of water and therefore no marine stores that I know of, so I could not get anything beforehand.

I stayed at the Bayside Motel right across the water from Collins Bay Marina, which is where my courses took place. 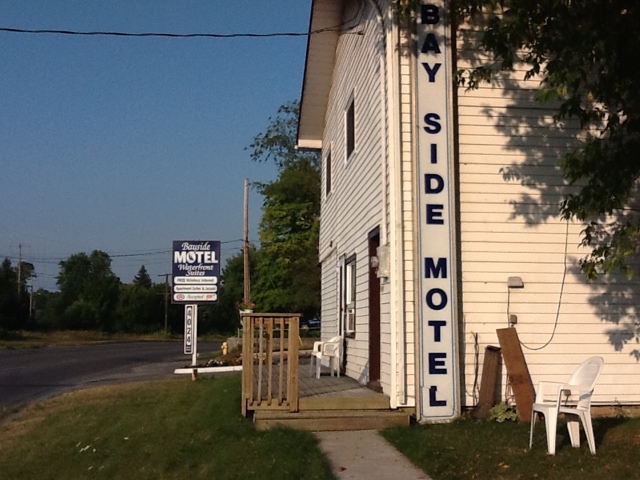 The owners were very nice and extremely accommodating. The room was really clean too, and to my surprise, it had a little kitchenette. 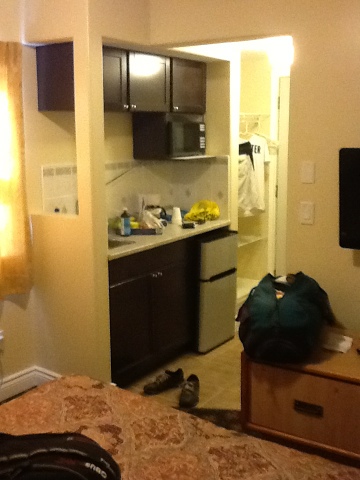 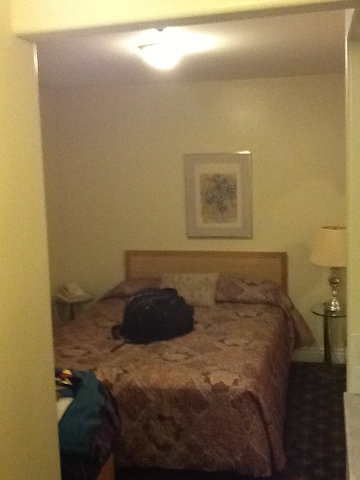 The grocery store was a bit of a walk, about 1 km away, and I had to walk in the rain, but I got everything I needed grocery-wise. I decided to sit in the back of the motel and look over the water. That's Collins Bay Marina across the water. 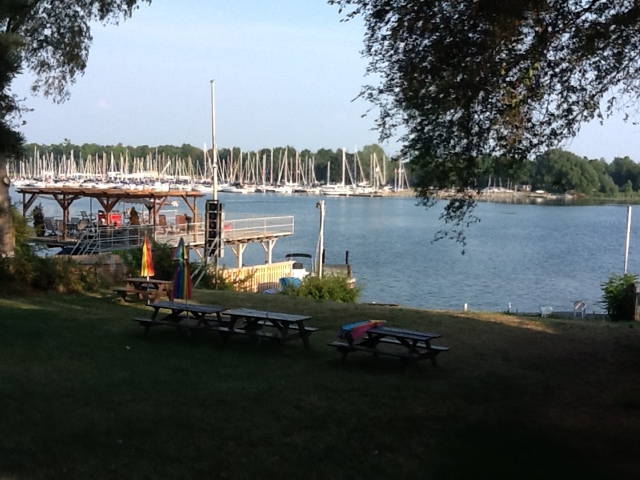 It was at this point that I realized that I forgot my toothbrush. My toothbrush is by far the most commonly not-packed item whenever I go anywhere. I usually pack it the night before and then take it out to brush the morning of and put it in the little cup beside my sink rather than back in my bag. So, back to the grocery store I went. One km there and back in the rain, all for a toothbrush.

Here is a shirt-drying contraption that I came up with: 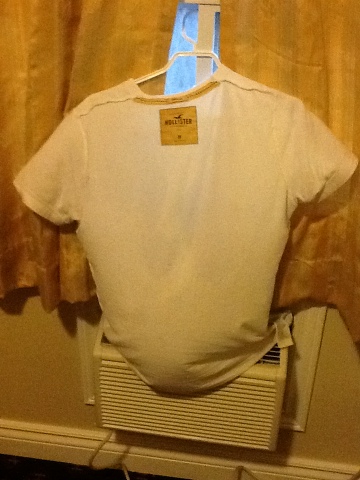 Let's skip ahead to the next day. I arrived at the marina in the morning and found the dock slip and the boat. She was a CS 30, owned by Phil Morris and his Wavelength Sailing School. 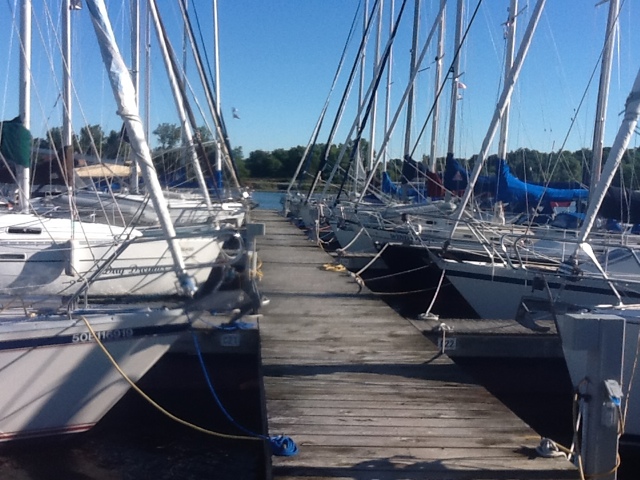 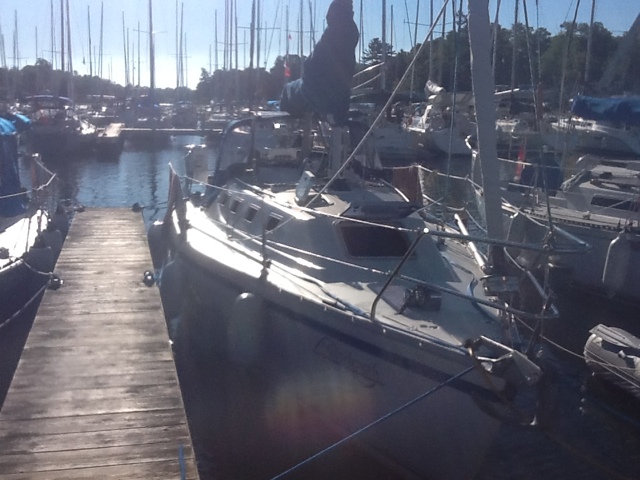 This is where I met Brian (Soon to be AKA Wilson - more on that later), Phil, and our instructor Jim Coolen. I chatted it up with Brian until Ruth, the third student, arrived shortly later. 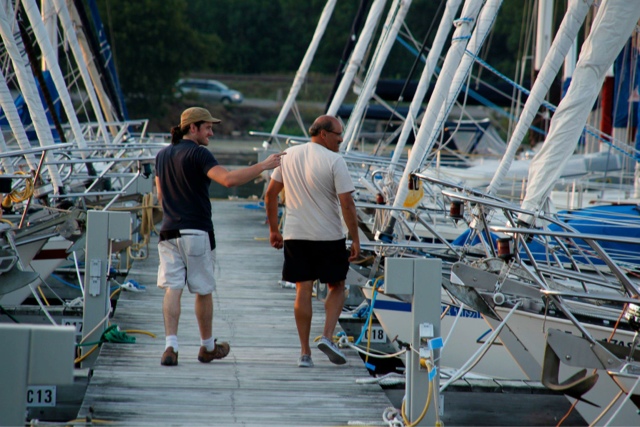 When everyone was ready, we did a walkthrough of the boat and then loaded our gear. Unfortunately, the weather was kind of crappy and it was decided that taking three beginner students out for their first sail ever in a thunderstorm was not a good idea. 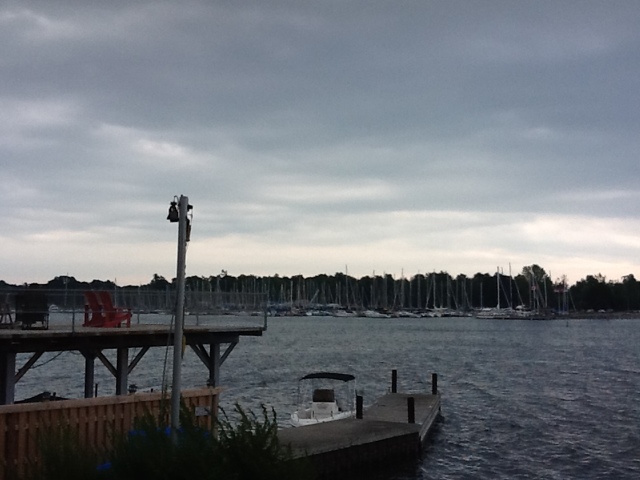 We stayed in the harbour that night and had a theory day. Brian barbecued us some amazing steaks with homemade potato salad. If this wasn't enough, turns out Ruth was an avid scotch taster. So we paired our steaks with some fine scotch. So much for the canned meat and quick-serve food that I was expecting.

The boat had a forward V-Berth, 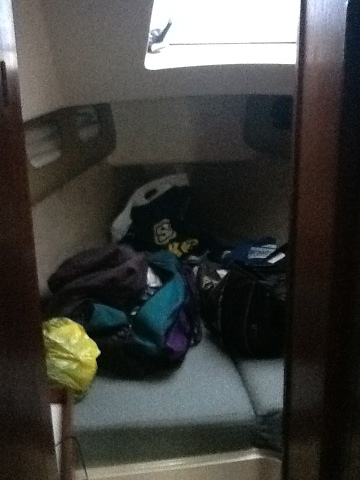 It also had an aft, starboard quarterberth, 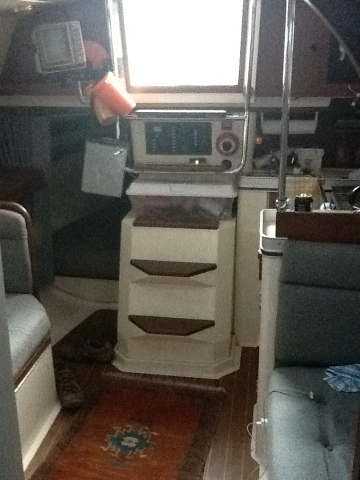 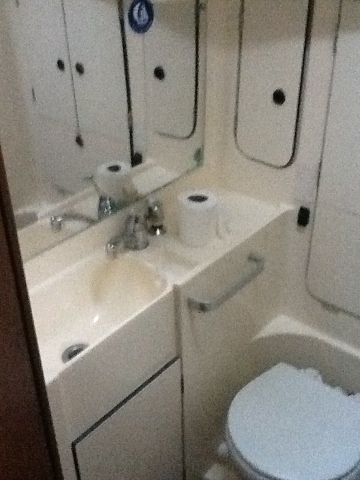 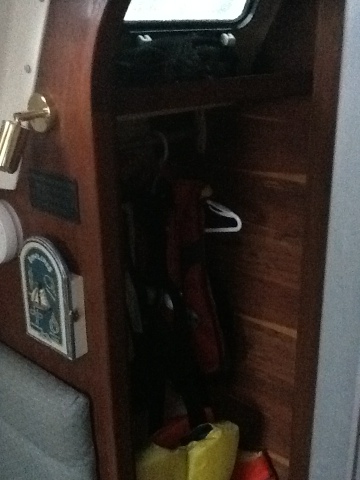 and then a pulldown bed in the salon. 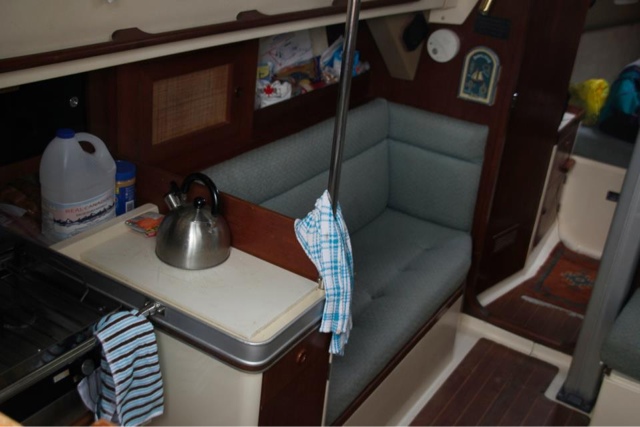 I was lucky enough to have the salon pull-down bed most nights as Brian is a Kingston local and drove home most nights to sleep.

I brought a bunch of bananas with me, which we hung from a ceiling hook in the center of the cabin. This was a joke placement at first, but we ended up leaving it there throughout the week as it would provide humour anytime someone would hit their head off it. We ate the bunch down to one banana, which remained there the rest of the week as no one wanted to eat that one remaining, sole, hero of a banana. It became an icon of the course, a symbol of the experiences we had. We appropriately named it 'Wilson', after the inanimate object of hope and inspiration from the movie 'Cast Away'. I ended up eating it at some point in the last couples days on the boat and the name 'Wilson' was transferred to Brian for some reason. That is where his nickname came from (I believe).

The food for the week ended up being far better than I expected. Better so than I would eat at home even. Here is a picture of a croissant sandwich that Ruth had made for lunch one day while underway. 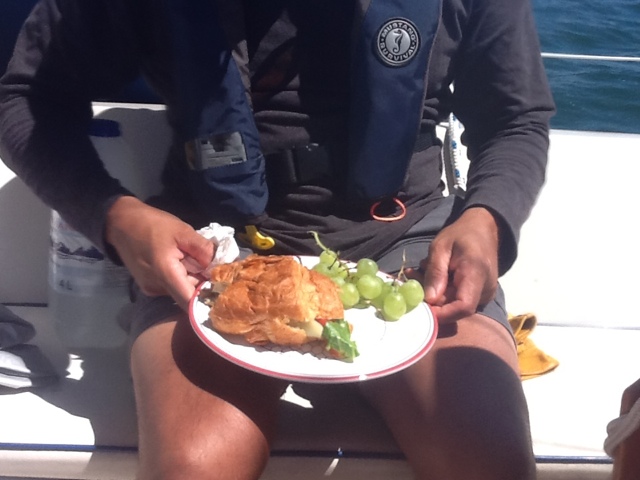 Here is a shot of the crew. From left to right is myself, Jim, Ruth, and Brian. 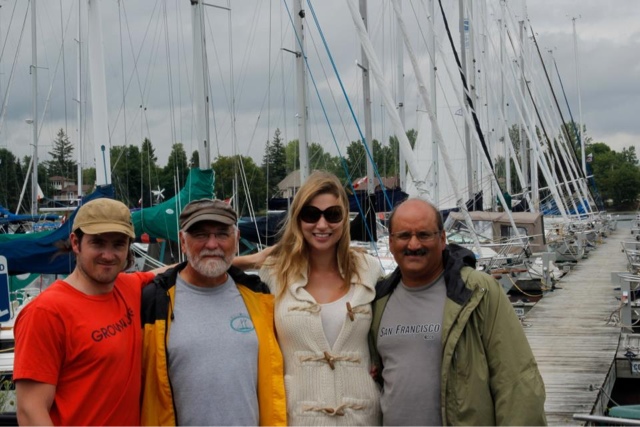 The rest of the week went well. We learned all about basic sailing theory, concepts, and how to apply them. We also did some crew overboard drills and some essential knots. We got to sail around Gananoque and the Thousand Island area and even spent a couple nights at anchor. These were shot in Breaky Bay. 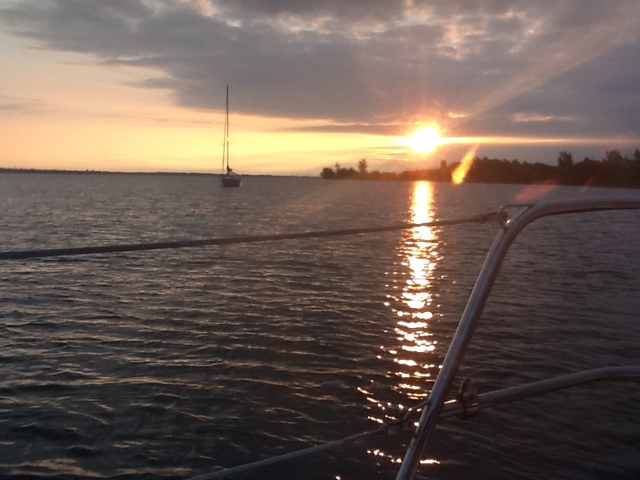 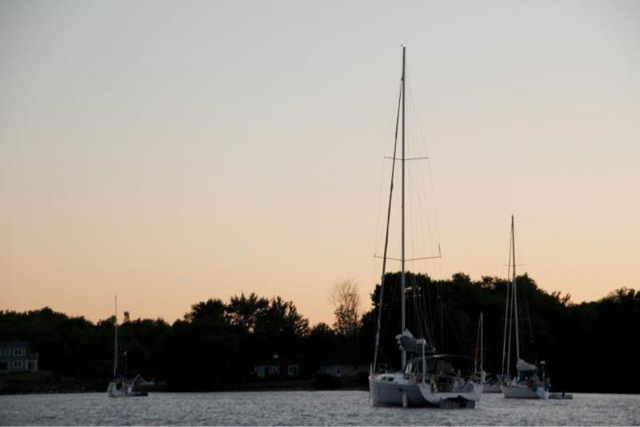 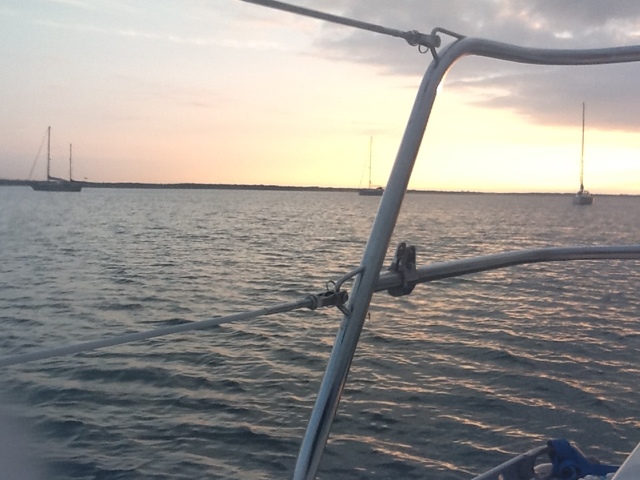 Everyone passed their exams and had a great time. With Basic out of the way, it was time to prepare for the Intermediate course the next week.

Here are some miscellaneous sailing shots. 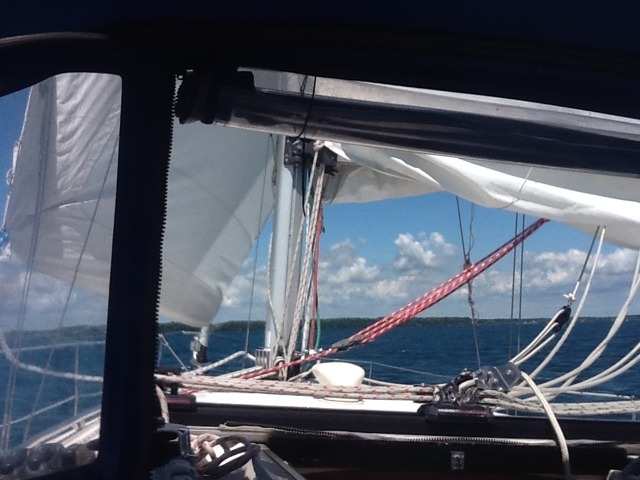 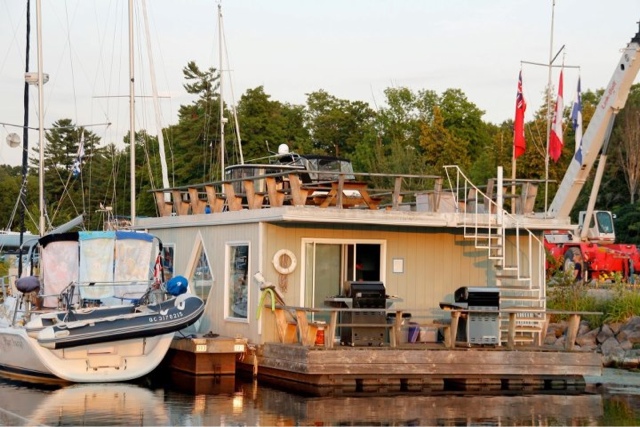 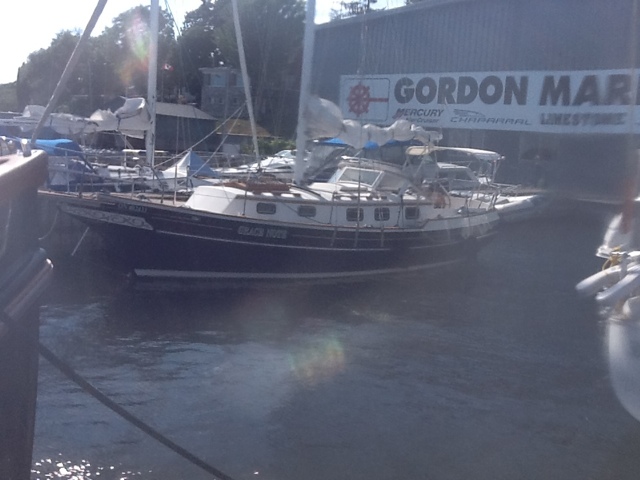 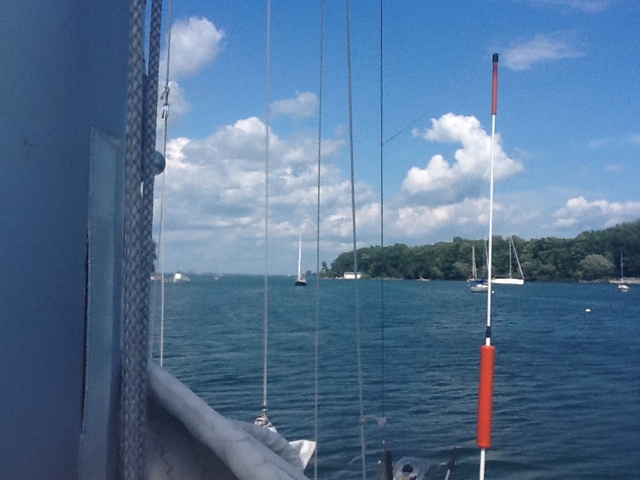 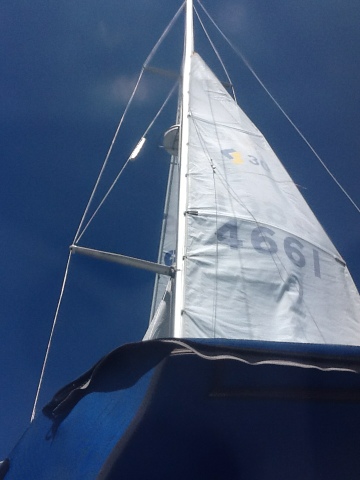 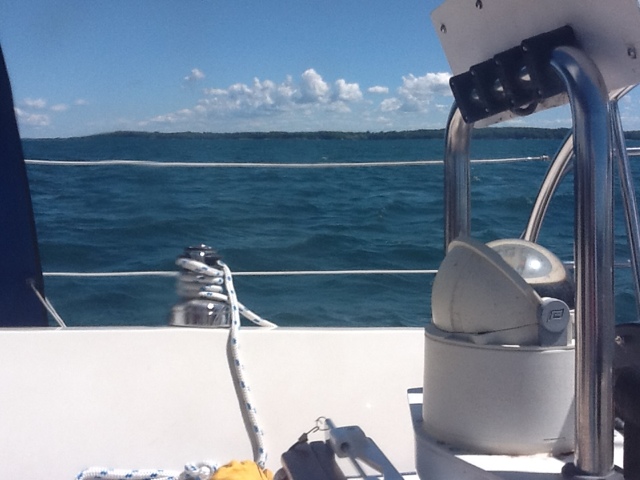 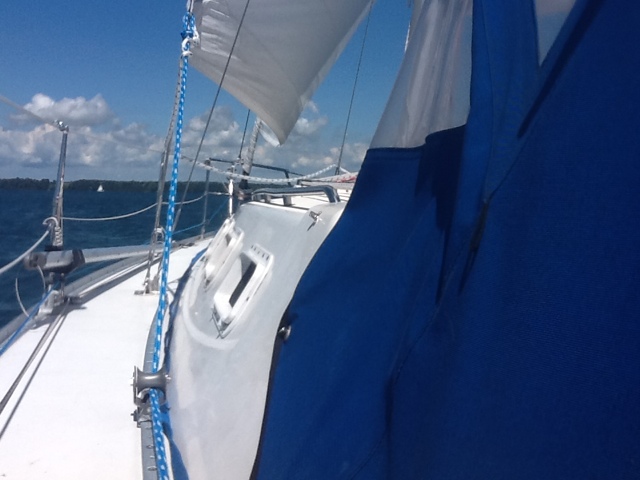 Posted by ShaunJuliaSailing at 7:34 AM